Defence Against the Dark Arts teachers

Defence Against the Dark Arts (DADA) is one of the compulsory subjects studied by students at Hogwarts School of Witchcraft and Wizardry. In Dark Arts lessons, students learn to defend themselves against the many forms of dark magic. 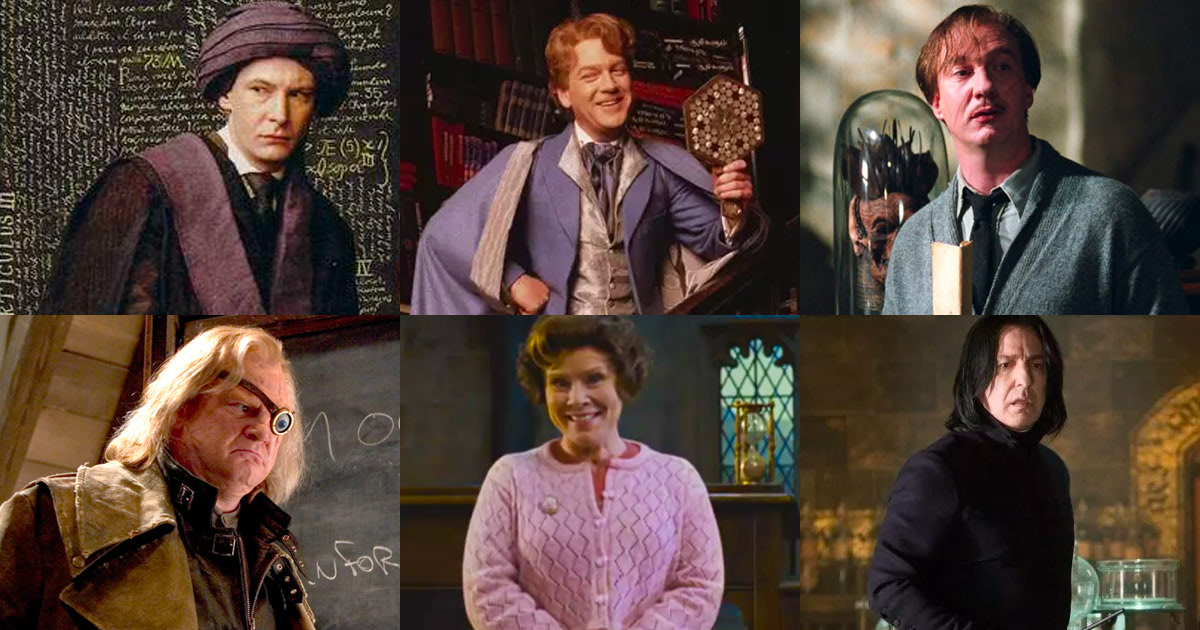 Over the course of the Harry Potter books, seven different teachers assumed the role of Defence Against the Dark Arts professor. Before the Dark Lord’s downfall, no Dark Arts professor lasted longer than a single school year. Dumbledore theorised that Tom Riddle jinxed the job after the Hogwarts headmaster refused him the teaching post.

Professor Quirrell alerts the school to a troll in the dungeon.

Before the events of the first book, Professor Quirrell taught Muggle Studies at Hogwarts. He travelled to Albania where he met the remnants of Lord Voldemort — alive because of his seven Horcruxes, but without proper physical form. Voldemort possessed Quirrell, feeding off him while concealed in a turban. When Quirrell returned to Hogwarts, he assumed the post of Defence Against the Dark Arts professor.

During the school year, Quirrell attempted to steal the Philosopher’s Stone for Voldemort (because the Dark Lord believed it would make him immortal), but was thwarted by Harry. Lily’s protective powers meant Voldemort couldn’t touch Harry, and Quirrell was destroyed in the ensuing confrontation.

Professor Lockhart’s Cornish Pixies lesson gets a little out of control.

In Harry’s second year, Gilderoy Lockhart, an esteemed author known for his adventures and defeat of many dark creatures, took the Defence Against the Dark Arts job. Over the course of the year it became increasingly apparent that Lockhart was completely incompetent. In one infamous class he set loose a flock of Cornish Pixies and left them to the class to recapture.

Ultimately, Lockhart was forced into the Chamber of Secrets, promising to rescue the possessed Ginny Weasley. It is revealed that Lockhart had been taking credit all along for the work of others, using a memory charm to wipe the original memories. In a twist of fate, Ron’s wand backfires when Lockhart uses it to try and wipe both he and Harry’s memories, permanently destroying the fraudulent author’s mind.

In Harry’s third year at Hogwarts, Remus Lupin takes the Dark Arts job. A childhood friend of Harry’s father and a member of the Order of the Phoenix during the First War, Lupin was a competent and kind teacher. Over the course of the school year, Lupin tutored Harry privately, teaching him how to produce a Patronus Charm to repel Dementors.

At the end of the year, it is revealed that Lupin was a werewolf (having been bitten as a child), and that Snape had been keeping his condition at bay using the Wolfsbane Potion. When his affliction is revealed, he’s forced to leave the school, assuming that parents will be disgusted to find their children being taught by a werewolf.

In Harry’s fourth year at Hogwarts, Alastor “Mad-Eye” Moody was to take the position of Defence Against the Dark Arts teacher. Moody exposed the students to some of the darkest magic in the Wizarding World — including the three Unforgivable Curses.

At the end of the year, it is revealed that Moody is in fact Bartemius Crouch Jr., a Death Eater working on Voldemort’s orders who had disguised himself as Moody using Polyjuice Potion. After his capture, Crouch is given the Dementor’s Kiss, sucking out his soul. The real Alastor Moody is found to be imprisoned in Crouch’s trunk, having been hidden away for an entire school year.

In Harry’s fifth year, a Ministry of Magic employee, Dolores Umbridge, was Defence Against the Dark Arts professor. Umbridge had a strong opposition to teaching the students practical magic and instead taught a strict “Ministry approved” theoretical course. This led Harry, Ron and Hermione to form Dumbledore’s Army, a secret society for students to learn to defend themselves against dark magic.

At the end of the school year, Umbridge is led into the Forbidden Forest, believing Harry and his “army” are procuring a weapon. She insults the centaurs of the forest who, outraged and offended, drag her away from the school.

In Harry’s sixth year at Hogwarts, Severus Snape, the Potions Master, is finally given the position he long coveted — Defence Against the Dark Arts professor. Dumbledore had refused the position to Snape on a number of occasions, believing it would cause the once-Death Eater to relapse.

At the end of the school year, Snape kills Dumbledore (on Dumbledore’s orders) and is forced to flee the school, with both Harry and the staff believing him to be at Voldemort’s side once again.

Harry, Ron and Hermione leave Hogwarts in Deathly Hallows to hunt down Voldemort’s Horcruxes. During this period, the Ministry of Magic is taken over by Death Eaters, and Amycus Carrow is given the role of Defence Against the Dark Arts professor. (At this time, the subject is simply called “Dark Arts”.) Carrow inflicts punishment on the students of Hogwarts, even encouraging them to perform the Cruciatus Curse on those who have earned detentions.

After the Battle of Hogwarts, Voldemort and the Death Eaters were banished. It is theorised that Carrow was subsequently sent to Azkaban. Presumably, Voldemort’s destruction also lifted the curse upon the job and future teachers lasted more than a single school year.