From Auguries to werewolves and Bowtruckles to Occamy, a diverse menagerie of exotic magical beasts live inside J.K. Rowling’s Wizarding World. Read on to learn about the many magical creatures of the Harry Potter universe. 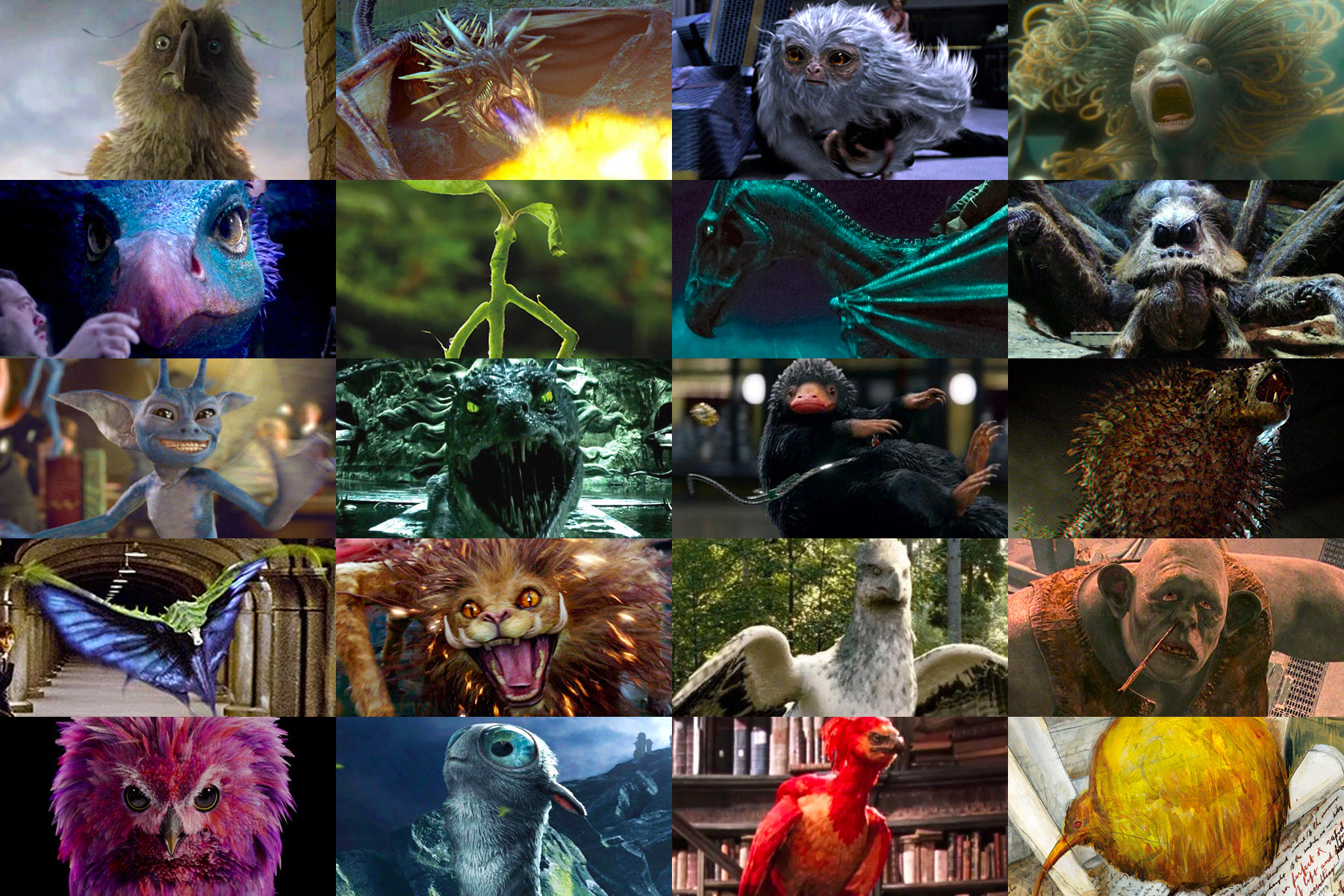 Acromantulas in the Hogwarts Forbidden Forest.

Ashwinder: thin pale-grey serpent which hatches from fires left to burn too long; lives for only one hour in which time it lays eggs and then ignites and burns, causing the eggs to hatch.

Banshee: malevolent Irish-native Dark spirit creature which takes the form of a skeletal green-tinged zombie-like woman and has a fatal cry.

The Billywig is a swift-moving sapphire-blue insect native to Australia.

Boggart: shape-shifting creature which takes the physical form of a person’s worst fear, its true form is unknown; repelled by laughter.

Centaur: intelligent creature with the body of a horse and head of a human; exceptionally proud and skilled in divination and astronomy.

Chimaera: rare Greek monster with the head of a lion, body of a goat and tail of a dragon; vicious and bloodthirsty.

Chizpurfle: parasitic crab-like creature with fangs; attracted by magic and (in the Muggle world) electricity.

Cockatrice: dangerous dragon-like hybrid creature with the head and body of a rooster and tail of a lizard.

Crup: dog-like creature which resembles a Jack Russell Terrier with a forked tail, originating in the Southeast of England; likely bred by Wizards as aggressive towards Muggles.

Demiguise: monkey-like creature which can tell the future and turn invisible when threatened; native to the Far East and has fur suitable for invisibility cloaks.

The Demiguise can tell the future and turn invisible.

Diricawl: plump flightless bird native to Mauritius and capable of disappearing and reappearing at will; known to Muggles as the dodo (who mistakenly attribute disappearances to extinction).

Doxy: small fairy-like creature (‘biting fairy’) with an extra set of arms and legs; a household pest capable of a venomous bite.

Dragon (Antipodean Opaleye): dragon native to Australia and New Zealand, eats sheep and is rarely aggressive; said to the most beautiful dragon species.

Dragon (Chinese Fireball): red and gold dragon with a fringe of golden spikes, native to China and also known as the Liondragon; named for the balls of fire it shoots from its nostrils.

Dragon (Hebridean Black): rough-scaled dragon with brilliant purple eyes, an arrow-shaped spiked tail and bat-like wings; native to the islands north of Scotland and more aggressive than its Welsh counterpart.

Dragon (Peruvian Vipertooth): smooth-scaled copper-coloured dragon and the smallest of the known species; has venomous fangs and a taste for humans.

Dragon (Romanian Longhorn): green-scaled dragon native to Romania; has long golden horns (sought-after by witches and wizards) which it uses to stab prey.

Harry battled a Hungarian Horntail dragon during the Triwizard Tournament.

Dragon (Swedish Short-Snout): silvery-blue dragon native to Sweden with the ability to shoot blue flames from its nostrils; its silvery hide is used in protective gloves and shields.

Erkling: green elf-like creature with a pointed face, likes to eat children and has an alluring high-pitched cackle; shoots darts at unsuspecting victims.

Fairy: small winged human-like creature with colourful or translucent insect wings; is vain with diminutive intelligence and lives in woodlands or glades.

The Erumpent has a large horn with a fluid that causes objects to explode.

Fire Crab: large Fijian-native tortoise-like creature with a brightly-coloured and heavily-jewelled shell; shoots fire from its backside when attacked.

Flobberworm: ten-inch toothless brown worm which lives in damp ditches and eats lettuce; its mucus is often used as a thickening agent in potions.

Fwooper: magical African-native bird with feathers of vivd and bright pink, orange, yellow and green, and a high-pitched song which will slowly drive the listener insane; its feathers are used as quills.

Ghost: floating transparent three-dimensional imprint of a once-living person or animal; can pass through solid objects.

Hagrid’s half-brother Grawp was a giant.

Ghoul: slimy buck-toothed ogre-like creature which inhabits attics and barns; has low intelligence and feeds on bugs and household pests.

Goblin: small and cunning highly intelligent human-like creature with long ears, fingers and feet; skilled in its own brand of wandless magic and metalwork.

Granian: grey winged horse known for speed and swiftness; its hair is used in potions.

Griffin: large hybrid creature with the head, wings and front legs of an eagle and body, hind legs and tail of a lion; capable of flight.

Grindylow: small and aggressive horned octopus-like water demon with a large bulbous head and pale-green skin; native to Britain and Ireland and dwells in weeds at the bottom of lakes.

Hag: savage being which resemble a warty and old ugly witch; possesses basic magical ability and has a taste for the flesh of children.

Hidebehind: vicious and nocturnal hybrid forest-dwelling creature which preys on humans, the result of breeding a Demiguise and Ghoul; tall with silver hair and can turn invisible.

Hinkypunk: one-legged wispy blue-grey smoke-like creature which carries a lantern to lure travellers into bogs and wetlands; can shoot fireballs from its lantern.

Hippocampus: large blue-green hybrid water-dwelling creature with the head and forequarters of a horse and the tail and hindquarters of an enormous fish; its young are called ‘tadfoal’ and hatch from large, semi-transparent eggs.

House-elves have a unique brand of powerful wandless magic.

Hippogriff: large hybrid creature with the head, forequarters and wings of an eagle and the body, hindquarters and tail of a horse; has large talons, a razor-sharp beak and is capable of flight.

Hodag: small four-legged dog-sized creature with a frog-like head and glowing red eyes; has a large horn and dwells in Muggle farms where it feeds primarily on Mooncalves.

House-elf: small elf-like creature with a long nose and fingers, large bulging eyes and bat-like ears; has unique wandless magical ability and is fiercely loyal and bound to serve unless freed with clothing.

Imp: small grey wingless pixie-like creature with yellow eyes, found across Britain and Ireland; lives in marshland and revels in pushing and tripping those who come across it.

Jobberknoll: small blue speckled bird found across northern Europe and North America; makes no sound until the moment before death when it screams and regurgitates every sound it has ever heard backwards.

Kappa: monkey-like Japanese water demon which inhabits shallow bodies of water and has fish scales and webbed hands and feet; holds water in a hole in its head and feeds on human blood.

Kelpie: shape-shifting water demon native to Britain and Ireland which inhabits rivers and lakes; usually takes the form of a horse with a bulrush mane and eats humans.

Lethifold: gliding and cloaked Dementor-like Dark creature which lives in tropical climates and feeds on humans.

Lobalug: ten-inch aquatic creature which resembles a yellow rubbery sack with spout; spits venom at attackers and is found at the bottom of the North Sea.

Manticore: rare and dangerous Greek-native beast with the head of a man, body of a lion and tail of a scorpion; capable of human speech and has skin which repels all known charms and a stinger which causes instant death.

At the full moon Mooncalves perform a mating dance — the actual cause of crop circles.

Merpeople: hybrid half fish and half human underwater creature with greyish skin, dark green hair and yellow eyes and teeth.

Moke: ten-inch silver-green lizard-like creature which can shrink at will; native to Great Britain and Ireland.

Murtlap: rat-like marine creature with a tentacle-like growth on its back, found in costal areas in Britain; its bite causes sweating and twitching and, in serious cases, flames to shoot from the victim’s rear end.

Nifflers are attracted to shiny objects and metals and make great treasure hunters.

Niffler: long-snouted and black-furred platypus-like rodent creature with a deep pouch for storing treasures; has an affinity for shiny objects and metals and is a skilled treasure hunter.

Nogtail: long-legged demon piglet creature with a thick stubby tail and narrow black eyes; suckles pigs which places a curse upon the farm.

Phoenix: red and gold plumed swan-sized magical bird with a golden beak and talons, healing tears and a long peacock-length tail capable of carrying immense loads; bursts into flame upon death and is reborn from the ashes.

Pogrebin: small grey Russian demon creature with a large head which resembles a rock; follows humans and and eats them after inducing feelings of lethargy and despair, causing the victim to fall to their knees.

Quintaped: five-legged club-footed creature with red-brown fur native to the Isle of Drear off the northernmost tip of Scotland; hostile and eats humans.

Salamander: scarlet red fire-dwelling lizard-like creature which lives as long as the fire it was birthed from continues to burn; its blood has regenerative and healing properties.

The Swooping Evil feeds on human brains and has a venom capable of removing bad memories.

Shrake: spiny fish-like creature native to the Atlantic Ocean; created by wizards in retaliation for insults from Muggles and known for destroying Muggle fishing nets.

Snallygaster: hybrid dragon-like magical beast resembling both a bird and reptile and native to North America; has serrated steel fangs and a bulletproof hide.

Snidget: small round walnut-sized fury golden bird with a long thin beak, bright red eyes and rotational wings; an agile flier and was used in primitive Quidditch matches before it inspired the invention of the Golden Snitch.

Sphinx: hybrid Egyptian-native beast with the head of a human and body of a lion; violent, highly intelligent and capable of human speech.

Swooping Evil: large blue and green spiky-winged butterfly-like creature which shrinks into a spiky-green cocoon when not in flight; feeds on human brains and produces a venom capable of erasing bad memories.

Thestral: rare skeletal black horse with leathery bat-like wings; only visible to those who have seen death.

Thestrals are one of the four known varieties of winged horse and are only visible to those who have witnessed death.

Thunderbird: large golden-white eagle-like bird native to America and commonly found in Arizona; highly sensitive to danger and can create storms as it flies.

Unicorn: single-horned and golden-hooved pure-white horse which begins life as a golden-coloured foal; the horn, hair and blood all have immensely powerful magical properties.

Vampire: human-like Dark creature which bites victims on the neck and sucks their blood.

Wampus cat: light brown and white-furred yellow-eyed cat native to the Appalachian Mountains and capable of walking on its hind legs; fast and powerful and capable of hypnosis and Legilimency (mind reading).

Werewolf (lycanthrope): human being who painfully transforms into a deadly wolf at the full moon; can infect other human beings by biting them.

The Zouwu is an enormous elephant-sized cat capable of superhuman speed.