Quidditch is the most popular sport in the Wizarding World. Originating in the eleventh century, it is now played by witches and wizards across the world. In Quidditch, two teams of seven fly on broomsticks around an oval-shaped grassy pitch. Teams attempt to score points by throwing a large red ball (Quaffle) through one of three fifty foot goalposts. There are seven players on a Quidditch team, each with a unique role.

The Gryffindor Quidditch team in action.

The word Quidditch has its origins in the British-location where the sport originated: Queerditch Marsh. A millennium later, the sport of Quidditch has evolved greatly to reach its current form. Read on to learn about all aspects of this popular magical sport.

Anatomy of a Quidditch team

The Gryffindor Chaser scores a goal.

Three Chasers attempt to score points for their team. The Chasers handle and pass the Quaffle — a large red ball — and attempt to throw it through one of three hoops located at the end of the pitch. Each goal scored gives the team in possession ten points.

Two Beaters protect their teammates from the Bludgers — two black iron balls which fly around the pitch attempting to knock players off their brooms. The Beaters use a baseball-like club to knock the Bludgers off course or into the path of opposition players.

The Keeper protects their team’s goalposts and tries to block incoming shots from the opposition team.

The Seeker is required to search for and catch the Golden Snitch — a small and golden walnut-sized ball which flies erratically around the pitch. The capture of the Snitch earns the Seeker’s team one hundred and fifty points and ends the game. A game of Quidditch only ends when the Golden Snitch is caught.

A Quidditch match is played with four balls:

The Quaffle is scarlet red and roughly size of a football. It is equipped with a Gripping Charm in order to help players catch it. It is also enchanted with a charm which reduces its speed if it falls from the sky.

The Bludgers are ten-inch black iron balls. They target players and attempt to knock them off their brooms.

The Golden Snitch is a golden walnut-sized ball with silver wings. It flies erratically around the pitch. The Seeker is the only player permitted to touch the Snitch.

Six in all, the fifty foot high goalposts are grouped at each end of the pitch.

Harry received a Firebolt broomstick during his third year at Hogwarts.

Each Beater is equipped with small magically-reinforced baseball-like club capable of repelling the Bludgers.

There are a wide range of broomsticks in the Wizarding World. Brooms vary in price and quality and more expensive brooms (like the Firebolt) have improved speed and handling.

The Golden Snitch has a flesh memory and remembers the first human to touch it.

A number of teams compete in the domestic British and Irish Quidditch league. 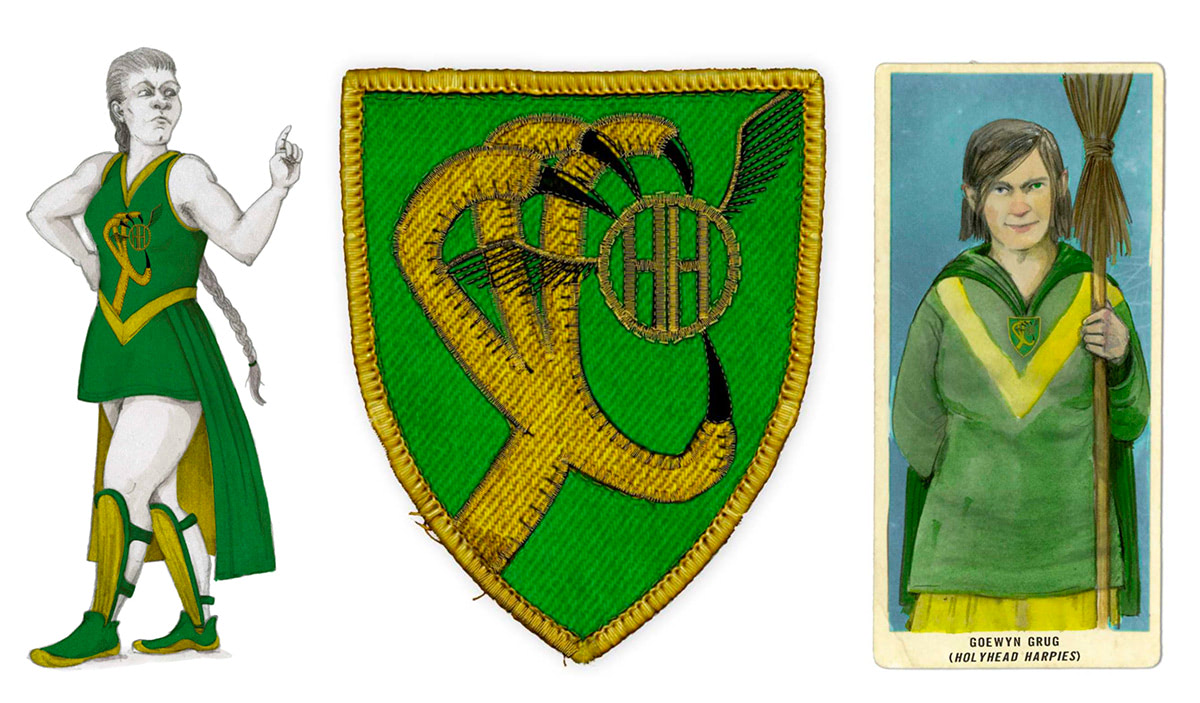 Witches and wizards admire the Nimbus 2000 in Diagon Alley.