Following on from our set visit piece the other day, we can now bring you the full interview with Evanna Lynch (Luna Lovegood) from the set of Harry Potter and the Deathly Hallows.

Question: I’m curious if you could talk a little bit about when you first got the seventh book. Where were you? What was your reaction to reading it?

Lynch: Yeah, I was invited to J.K. Rowling’s big thing in the History Museum in London. I went all dressed up and everything as usual and didn’t get recognised. Lucky. And, yeah, I read it in my hotel really quickly. My reaction, yeah, I was a bit overwhelmed. You know when you’re a fan you want to take it all in but you feel guilty when you put the book down because it’s like, “there’s stuff I don’t know in there”. I read it in a rush and sort of cried for ages after. 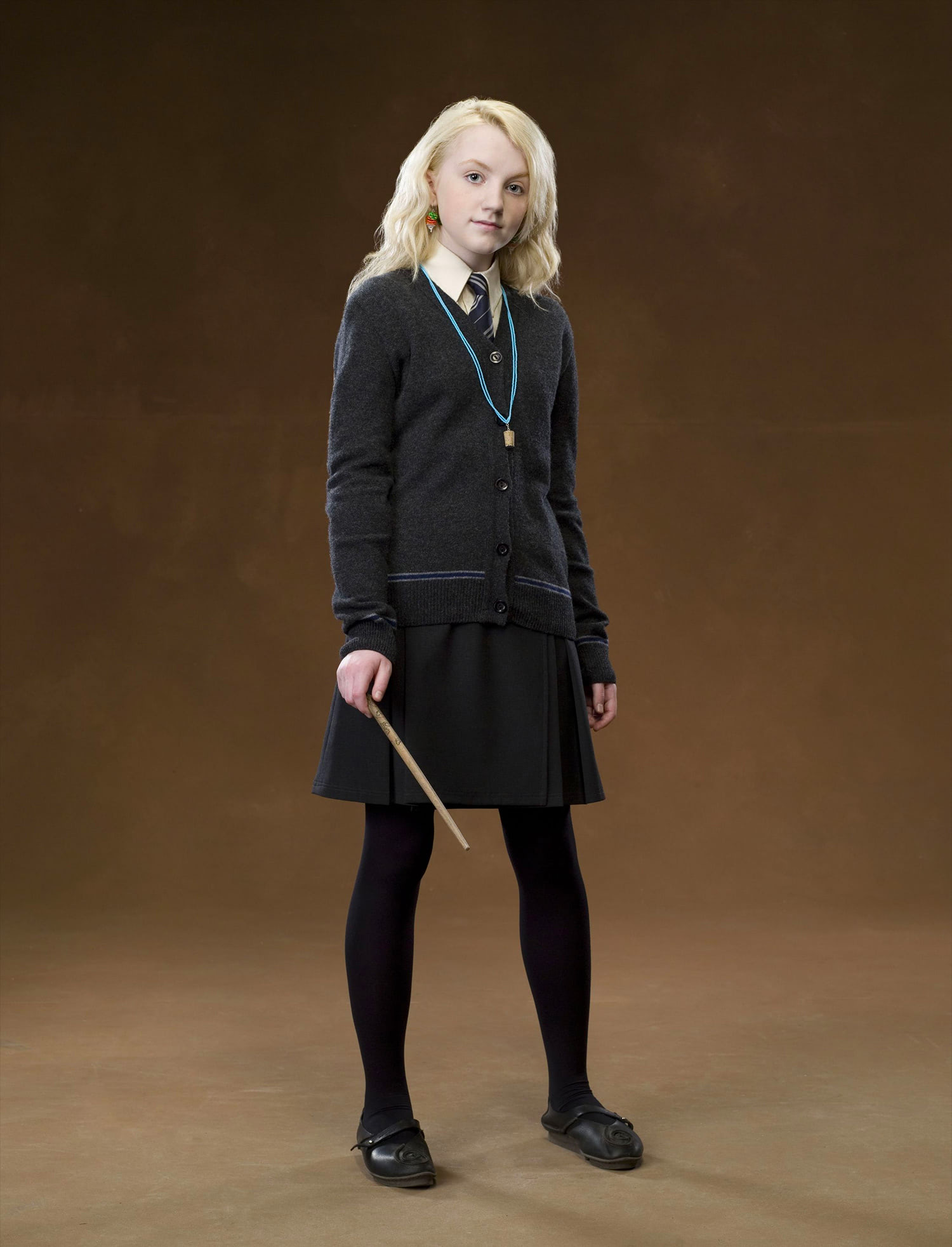 Question: You’re sort of the ultimate dream come true fan because you became a character in the films and now you’re seeing it to the end here. What’s that like for you? I mean, this was kind of your first acting job. You’ve been with this franchise for a while now and now it’s coming to an end, what does that feel like for you?

Lynch: Yeah, weird I know. Someone asked me on set, “do you still get excited coming on?”. I don’t get used to it at all. And I feel really sad because I don’t feel like I was one of the actors. I feel like I was a really big fan. You know, sure I could act but I don’t know what will happen, whether I’ll be back in films again. I hope so. It is like it’s a dream. What’s going to happen after? My whole life has been structured around it.

Question: Has it sunk in quite yet?

Lynch: It did a while ago because in all the interviews we do people ask us how you are feeling now that it’s ending. But then one of the days we were watching the Half-Blood Prince DVD and there was just loads of scenes of us together and I just started crying and I just couldn’t stop … We were in the Room of Requirement and it feels like there was sort of symbolism because my first scene when I started was in the Room of Requirement and I was just really shy and everyone was learning. That’s the thing. Everyone has their wands [casting] the Patronus and that time we were doing the last scenes in the Room of Requirement and I just feel that it’s like a room where they learn everything, where they all grow up. They all leave the room, they are all sort of going into battle. To me it seems like leaving childhood, like leaving Harry Potter and going out into the adult world and battling. So yeah that really upset me.

Question: Now, we were told that you sort of came up with a dance that Luna does with her father. Can you talk about that and what’s the dance?

Lynch: Yeah, it didn’t take much coming up with [laughs]. In the book, the day before the wedding scene, it’s Luna and her Dad I think, and I was wondering what we were going to have to do. I read through the chapter and it said that she was off in the corner by herself and she’s spinning. Harry thinks she’s batting away Wrackspurts. I was doing a few things how it could be and the next day we were on set. We do this whole thing where her Dad is talking to Harry and I have to drag him away, embarrassing Dad. Although it doesn’t really matter because we then go on to the dance floor. We just do this thing where we’re spinning and closing our eyes and everyone clears [the dance floor]. Everyone is sort of doing this step, this ballroom dancing thing, and they had this choreographer there and he was saying, “what could we do?”, because he was too experienced to put something that wacky [laughs]. We just did it, yeah. 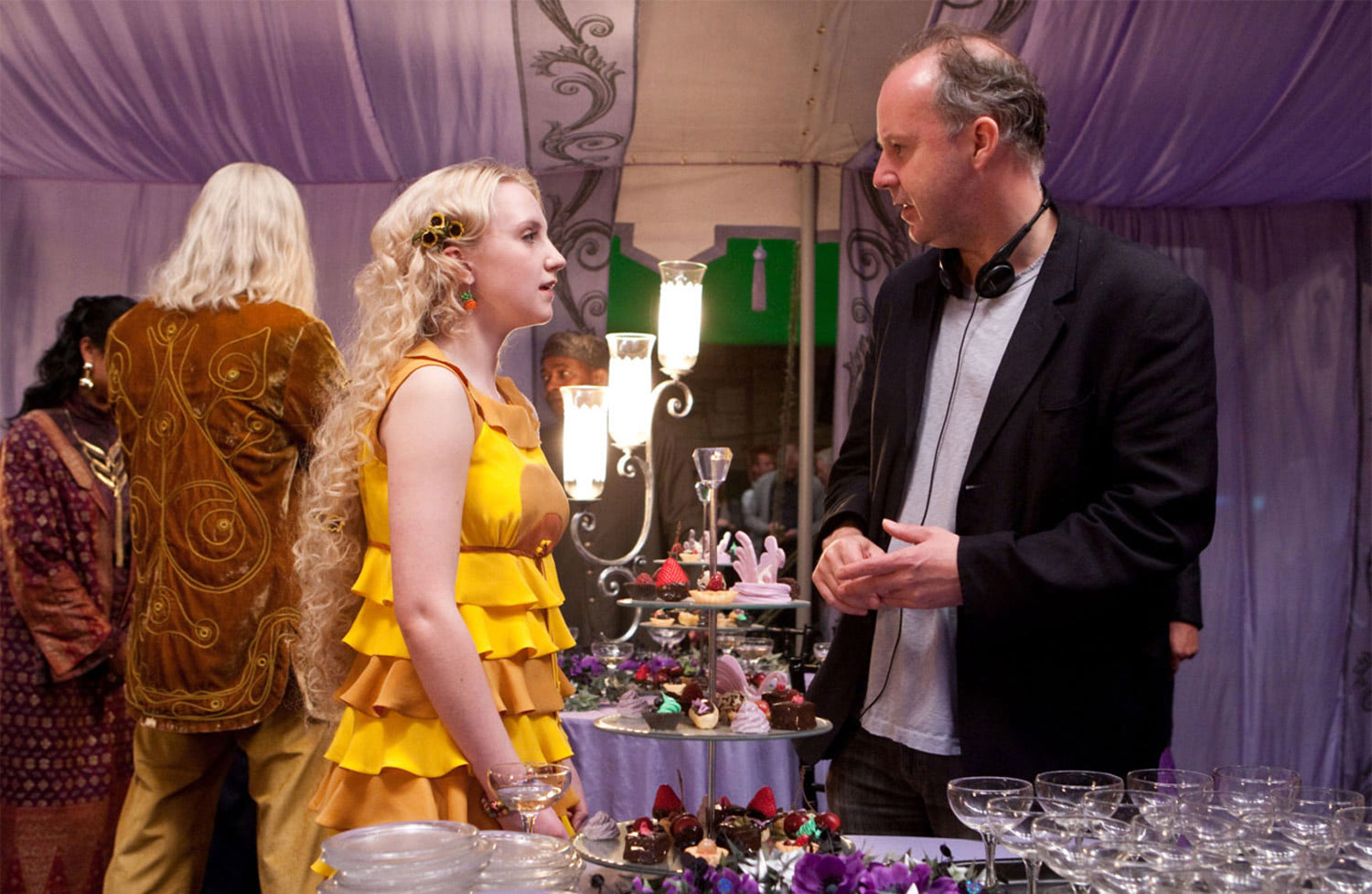 Evanna Lynch and director David Yates during the wedding sequence.

Question: What was it like working with him [Rhys Ifans] as your father?

Lynch: Oh, it was brilliant. Yeah, I thought he was just perfect … She’s always wearing all this purple and all these funny things [and] I sometimes feel a bit like everyone else is in their Hogwarts robes [and I’m] a bit of an outsider. That’s how she’s meant to feel. And then when he came along it was like we were alone together because he’s in this yellow mad stuff. Yeah, it felt really relaxed. It was nice.

Question: You also play a prisoner in this film, could you talk a little about filming those scenes and how intense are they?

Lynch: Yeah, it was with John Hurt, who plays Ollivander. It’s a really spooky place because the ceilings are so low. Oh, and he has to be sort of frail and everything. And Harry comes down and then there’s Bellatrix torturing Hermione – you can hear the screams. You just get the feeling like, “how can you get out of here?”, and none of them have their wands. Yeah, it’s horrible.

Question: Do you prefer playing the Luna that gets to dress up, for example Slughorn’s party and the wedding, or being captive and in battle? Which side do you prefer?

Lynch: I find it weird playing her in battle because … she’s so sort of Zen, she’s really calm … I think she really believes in fate and she doesn’t worry so much and yet everyone else is. I think she’s more in her zone … I asked David Yates a few times, “what does she do when she’s worried?” and he’s like, well she’s not worried about her own death but she’s worried for her friends. So we kind of played with that a bit but it still feels a bit weird. 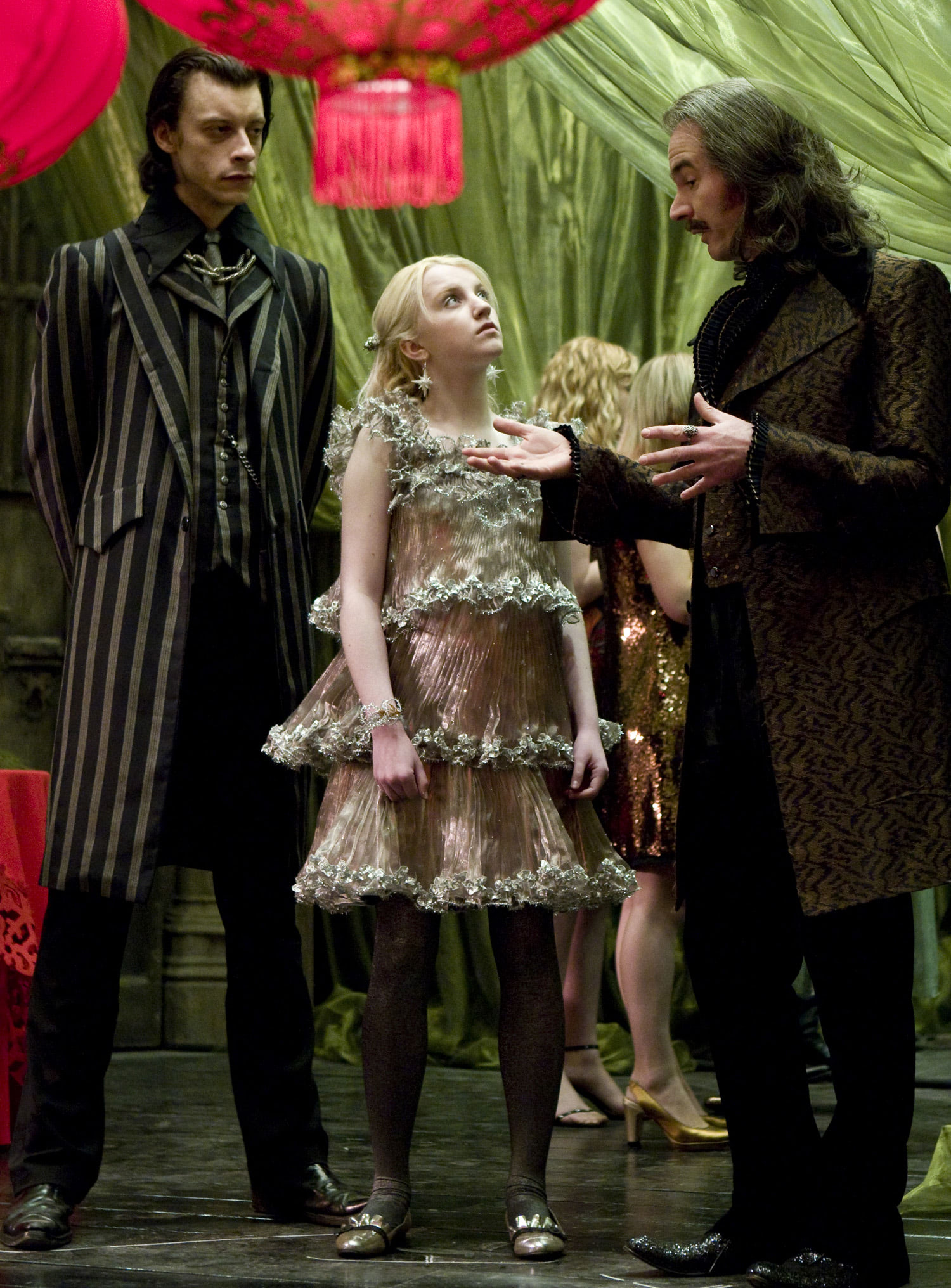 Question: Is this your first time seeing a lot of these photos [Deathly Hallows promotional stills]?

Lynch: Yeah, I’ve never seen them. I want to go around [and see them] [laughs].

Question: So you’re just as much of a fan as all of us looking at photos like this?

Question: Have you seen any footage? Do you watch playback when you’re acting? Did you watch that stuff or is this your first time really seeing it?

Lynch: We don’t really get a chance to, no. I don’t think they like you doing that. Sometimes we see it when we’re doing ADR, the voiceover, we see it then. Most of it’s a surprise. Yeah, it’s nice to keep it to the premiere. When you have to do interviews on the red carpet they’re like, “what was your reaction to this?”, and when you’ve just seen it you really do feel excited and so it’s nice that it’s all a surprise then.

Question: Is Luna much different in these two films than she has been in the past couple or is she sort of still the same?

Lynch: She’s always going to be the same [laughs]. Yeah she doesn’t change, that’s the thing about her, she knows herself so well. Most of them, they go through all these stages, where they’re like battling with themselves, but she’s so happy with herself that I think the only thing that changes is her surroundings. She has her friends this time and it makes her happier but it doesn’t really change her.

Question: One of the most touching scenes early in the book is when Harry looks up and sees the ceiling that Luna has painted in her house with all of her friends. Is that in the movie?

Lynch: I don’t think so. The house is in there … I think Harry knows by this stage how much it [the friendship] means to her and the way she sort of brushed it off in the last film where she says it’s a nice feeling that we were friends. I think he realises then but it was a pity that scene got cut out. 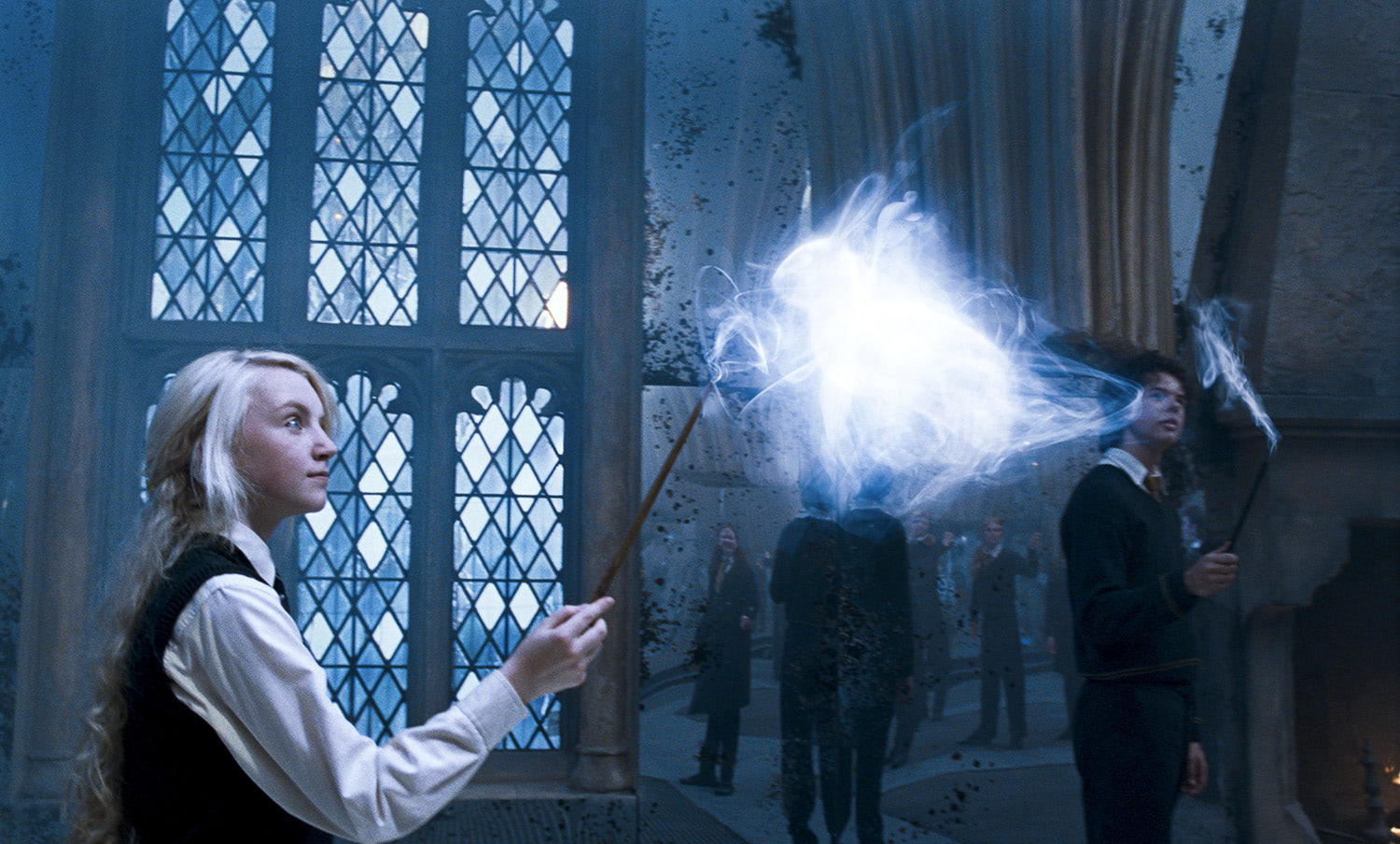 Luna Lovegood casts a Patronus in Order of the Phoenix (2007).

Question: At the end of the day, how much of your own personality do you feel you’ve been able to inject into Luna? Is it completely from the novels or is it sort of a marriage of both?

Lynch: Yeah, a marriage of both. I still would read the books and think I’m not playing her exactly the same. We’re not the same and you sort of have to find a balance. If I was too much like her I just wouldn’t be able to be objective. I think in the films a lot of the lines are trying to bring out the funny side in Luna. I always notice that kids always love Luna’s character. A lot of kids say she’s my favourite because she’s really kooky. I just think she’s really wise as well. It’s not that her head’s in the clouds – she sees that everyone talks about her. She knows she’s a bit weird and she’s so settled in herself and I think that’s really mature. Wise, yeah, I try to push that a bit but sometimes it’s impossible with the lines.

Question: What’s something that you’re really going to take away from your several years now of being here and what are your plans for the future?

Lynch: I think more of a sense of belonging now. I’ll take that away because before when I came onto the set I really idolised the others and I just kept feeling unworthy. I didn’t know how to talk to them or anything. When people would say are you going to do more work, I’d be like no, I’m just a fan. I’ve seen more of the actors and you don’t have to be perfect all the time, it’s not like you’re born knowing all this stuff. Acting is just like having life experience. I’ll take that and feeling like I’ve been a part of this film. When I watch the film I’m proud because I had something to do with it and, yeah, I’d love to do more acting. I don’t know yet. I’m going to go to a performing arts college. I just feel like I cheated my way in a bit [laughs]. 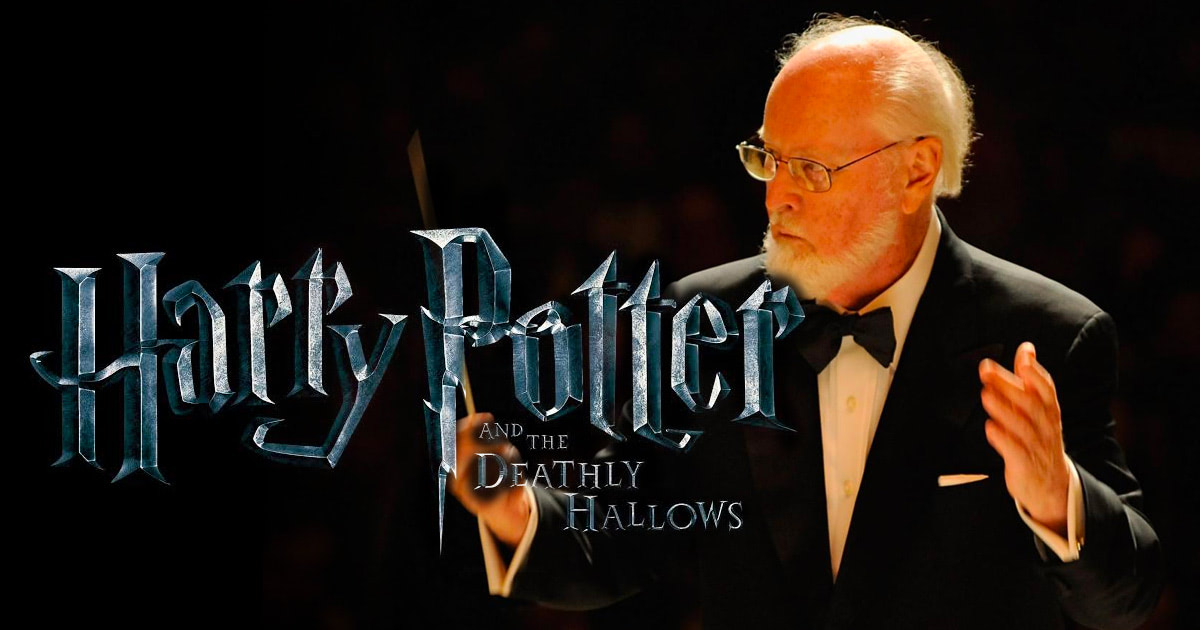 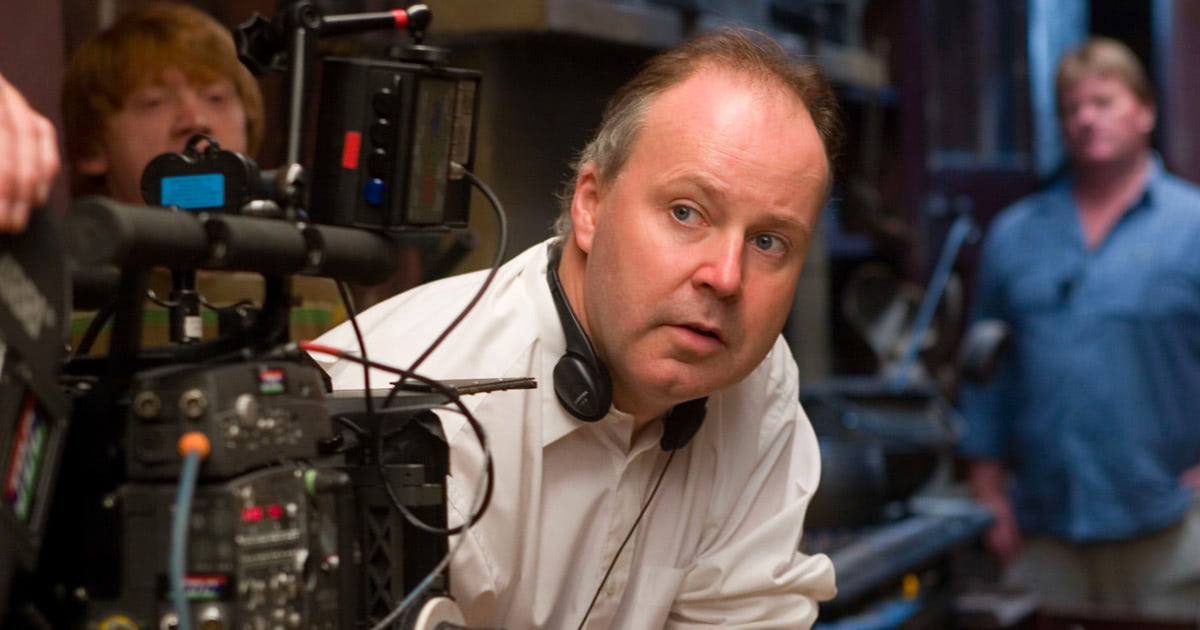